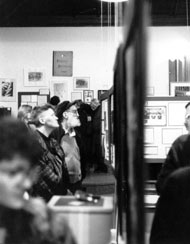 Visitors to the Following the Muse: History of the Arts in Nelson exhibition that was shown in 1991. Touchstones Nelson Collection

A view of Nelson from the tramway that brought the ore down to the Hall Mines Smelter from the Silver King Mine on Toad Mountain ca. 1900. Touchstones Nelson Collection 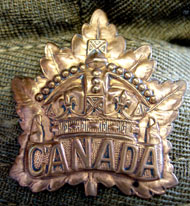 The Launch of the S.S. Nasookin, 1913. The Nasookin was part of the C.P.R. fleet on Kootenay Lake, and in its time was the largest lake boat operating west of the Mississippi. In 1933, it was sold to the Province of British Columbia and converted into a vehicle ferry until it was retired from service in 1947. Touchstones Nelson Collection

A Condensed History of Nelson

First Nation people resided in the Nelson area more than 5000 years before European contact. Archaeological material collected along the shores of Kootenay Lake and Kootenay River reveal a continual history of occupation and human activity. With the implementation of the Canada-US border, traditional North-South aboriginal travel routes were restricted, a consequence that is still felt in local First Nation communities to this day.

The first European exploration of the West Kootenay was by David Thompson between 1807-1811, although he never saw the future site of Nelson. In 1826, William Kittson of the Hudson’s Bay Company recorded the first journey down Kootenay Lake’s west arm to the Columbia River. He was followed by Captain Palliser in 1858 and Edgar Dewdney in 1865.

It was Gilbert Malcolm Sproat who first envisioned Nelson as “ a town above all towns,” citing its ideal location, accessibility to water and surrounding beauty as important factors. Sproat, often referred to as the “Father of Nelson,” persuaded the provincial government to reserve the town site just as the silver-bearing galena ore of Toad Mountain was being exploited.

Toad Mountain’s rich mineral deposits were discovered by Winslow and Osner Hall and their party from Colville, Washington, which led to the development of the Silver King Mine. Hundreds of prospectors were attracted to the future lakeshore townsite as it grew into a distribution centre for the mine. In 1889, “Nelson” was named after British Columbia’s Lieutenant-Governor, Hugh Nelson; and, by 1897, Nelson was incorporated as a city.

At the time of incorporation, the new city already boasted a water system, hydro electric plant on Cottonwood Creek, fire department, public school, assorted churches, an operating smelter and other industries including an extensive business sector. A city musical band and Amateur Athletic Association were among the many cultural and recreational groups. Boisterous holiday celebrations occurred from July 1st to 4th with horse races on the city’s main thoroughfare.

By 1914, the “Queen City” was a Divisional Point for the Canadian Pacific Railway, Canada Customs, central Post Office and Supreme Court. The community boasted two high schools (public and private), a city-owned hydro electric plant on the Kootenay River at Bonnington, a waterfront sawmill, sash and door, mattress and box factories, a C.P.R shipyard and a number of boat works. Real estate agents enticed British immigrants to the area with propoganda that exaggerated the availability of land and the ease of establishing a fruit ranch in the Kootenay region. Community life was growing steadily as fraternal, national, community and scouting organizations flourished. Nelson was proud of its championship rowing, hockey, curling and “football”(soccer) teams while the Public Library, Opera House and numerous performing groups were also thriving.

The 54th Kootenay Battalion, C.E.F., authorized by Ottawa on the 1st of May, l915, recruited large numbers of young men from Nelson and area adding to the already large number of 1914 recruits who had signed up with regiments and naval commands. By 1918, the 54th Battalion had suffered 685 casualties† and the scarcely-used C.P.R. tourist hotel at Balfour became a sanatorium for injured men from all over Canada. Many of those who died are buried in the Nelson Memorial Cemetery.

Between the wars, Nelson expanded its hydro electric plant, annexed the Fairview area, opened one of the province’s first junior high schools, became a destination on the highway through south-eastern B.C., and added a factory that shipped match-blocks to the Eddy Match Company in Hull, Quebec. In 1935-6, Nelson constructed one of the first civic centre facilities in Canada

Many of the City’s finest were again called to arms in 1939. During both world wars Nelsonites have won the Victoria Cross: Roland Bourke during World War I and in World War II, Robert Hampton Gray, a Trail native who grew up in Nelson. The homefront was active throughout the second world war, hosting commonwealth servicemen on leave, manufacturing parts for Boeing’s Catalina bombers in the Civic Centre badminton hall, and contributing generously to war bond drives and soldiers comfort campaigns.

Post-war Nelson expanded and by 1961 the City had annexed Rosemont and Upper Fairview. In 1950, Notre Dame College was established and with its charter in 1963, it became the province’s second university. Other city post-secondary institutions were also established including Kootenay School of Art and the B.C. Vocational School (later, Selkirk College). Education continues to thrive in Nelson with the Chinese Medicine School, the Kutenai Art Therapy Institute and (a new) Kootenay School of the Arts: Centre of Craft and Design.

The Norman Stibbs Airfield, located along the shoreline on a land fill site, was developed under the auspices of the Nelson Pilots Association with the support of the City of Nelson. Further land fill provided space to develop Chahko Mika Mall, expand parkland and recreation fields, as well as the Centennial Pathway.

In 1977, the BC Heritage Conservation Branch initiated a study of heritage structures in Nelson. The city was selected because of its size, large inventory of heritage buildings and a static economy since 1920. Nelson: a Proposal for Urban Heritage Conservation concluded that the city could be promoted as a cultural centre focusing on its Victorian architecture. Federal, provincial and municipal governments provided grants for Nelson’s revitalization projects coordinated from a Mainstreet office on Baker Street. Buildings were rediscovered and sympathetically restored rather than demolished. Nelson now has a diversified economy and its vibrant city centre has been profiled in newspapers, magazines, television as well as movies (Roxanne 1987 and Housekeeping 1987).

Since 1990, Nelson has attracted many new residents who “live here and work everywhere” thanks to modern technology. Lifestyle and cultural opportunities have become important to many people and the cosmopolitan feel of the city is an additional incentive. More than ever, Nelson is “a town above all towns,” as envisioned over a century ago.